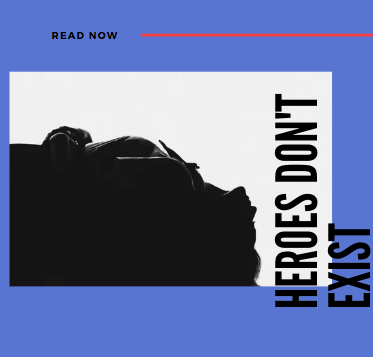 The hero sighed heavily, leaning their body against the brick wall of the alley, letting the weight of their body off their legs and onto the ground.

The villain tilts their own head to the side, “Oh, come now. Don’t tell me you’re giving up here.”

“We’ve been at this for months, the little skirmishes, the full blown fights, the cat and mouse chase, I’m done.”

Underneath his mask, the villain choked down a gasp of surprise and for a moment something other than hatred washed over them. The steely blue of their eyes softened and he almost cared for the crumpled figure in front of him. Before a conscious decision could be made, the mask came off. Now it was the hero’s turn to gasp.

“Well that’s the big shock about betrayal, isn’t it?” Lifting up her head and looking the villain in the eye. “It never comes from your enemies.”

“We are hardly friends,” retorted the villain, trying to regain his composure.

Smirking, shaking her head knowingly, “Yes, we are family, aren’t we.” Heaving herself of the ground and dusting her tattered jeans she continued “Not a close family, but it still that means something, brother.”

“Blood of the comrades is thicker than water of the womb,” the words he silently whispered before leaving home came back to the villain.

Interjecting, anew with righteousness she shot back “Well look around yourself, the ‘blood of you comrades’ pools around your feet, where are the tears.”

There was something eerily terrifying about the way she spoke to you, twirling a small knife in one hand to remind you of the tattoos it etched in her skin. Her voice, a soothing melody that carried dagger like words, words that knew the chinks in your armour. Blood, now dried on her dress of indistinguishable origins, a mix of countless of his “comrades.” And a glint in her eye, the same one that he had too…

“And you think you are so morally right, as if the bloodshed isn’t your doing too. Please remember that heroes don’t exist, that goodness is an illusion; because what seems heroic to you is always, and I mean always, villainous to someone else.”

Maybe the sharp retorts were a family thing.