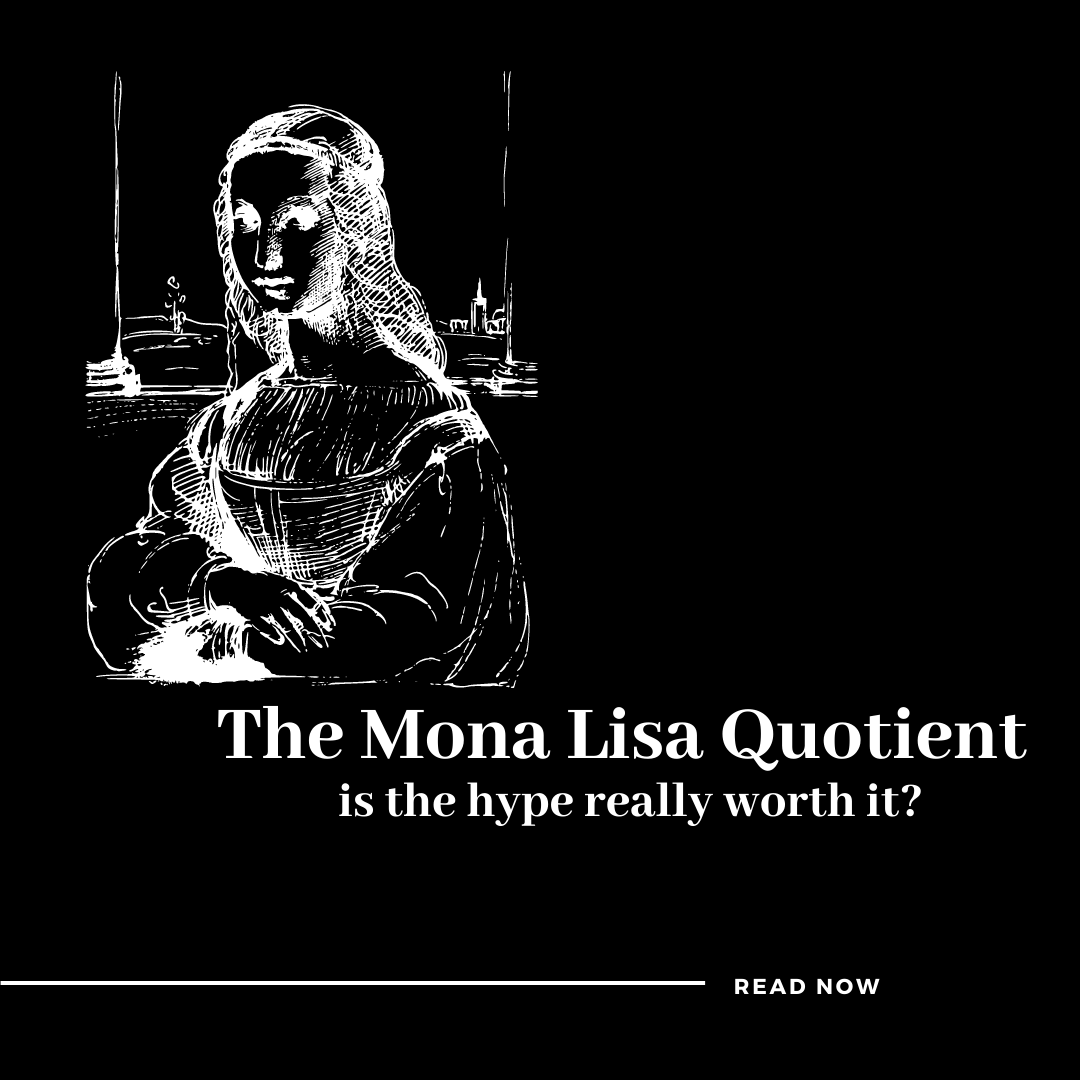 The Mona Lisa Quotient [noun] – a unit of measurement that quantifies if the hype is really worth it. In general, a higher quotient co-relates to greater let-downs in user experience.

This quantifier is inspired by my time in France, when I had the opportunity to visit the Louvre not as a tourist but with the mindset of a student. As I walked around the massive grounds of the world’s most abundant museum, I saw that visitors were disparately higher in Room 711.

There hangs the Mona Lisa: the only painting in a corridor full of invaluable art with its own personal security, double paned glass, and a 40 tourist long line at its behest. Why?

The Mona Lisa was revered even when Da Vinci was working on it, and for all my personal skepticism there is no denying that there is something uncannily natural about the form. However, that is not the main reason for the prominent public perception that shrouds this artwork. It has a complex yet incredibly interesting story that will help me explain how I derived the Mona Lisa Quotient.

For much of the pre-napoleonic era, this painting was reserved squarely for the eyes of the French monarchy – the public dissent against royalty made a particularly good motivator for visitors to flock to the museum. With more recognition came more questions, and the mystery identity of the woman in the painting enraptured poets and writers alike, adding a layer of social debate.

But the first headlines were made when it was stolen in 1911, and even Pablo Picasso was arrested as a suspect as an empty space on a wall became the Louvre’s main attraction. People assume, and rightly so, that only objects of value are stolen – our thief knew nothing about the piece but successfully skyrocketed the price of the work.

Soon after, from 1919 onwards prominent artists including Andy Warhol defaced printed replicas with much fervor and within the span of ten years, the Mona Lisa saw immense international press especially through its association with famous public figures.

Through this brief summary we can identify four factors that go into evaluating our quotient – socio-political ties, inherent monetary value, pop culture association, and importance in media coverage. In a world where much of what we consume is dictated by social media trends and influencers, The Mona Lisa Quotient can be fundamentally useful in all spheres of life from entertainment to investment.

Take for example DogeCoin, a viral crypto currency that hit its peak in May last year after business celebrities like Elon Musk and Mark Cuban promoted it on Twitter. In-fact every single significant jump in the price of this coin is related to some sort of large news cycle. Similarly, GameStop shares saw unprecedented gains after a Reddit fuelled rally where retailers used their stake to express political dissent against the Covid-19’s disproportionate effects on the middle-class.

Sure, a lot of people who entered these financial decisions left making a lot of money but there were also plenty others who documented losses. The fundamental difference between the two groups was that most people in the green could identify why prices were soaring. That’s the purpose of The Mona Lisa Quotient – to get the user to look at a product or idea through the lens of the four above mentioned factors and beyond the smoke screen built by temporary fame.

Its nearest equivalent is a “Warhol” which equals to fifteen minutes of primetime popularity. This unit is based on the assumption that longevity in public conscience is a good indicator of true relevance, ergo more the Warhols the higher the probability that the subject has properties of intrinsic value. My quantifier works similarly but instead of focusing on a time frame or on how renowned something is, the quotient looks at why it’s famed.

A closer but much more niche comparison could be made with the “Hawking’s Index,” a unit that measures how much of a book people read before giving up. Rather than pre-judging a book by looking at the factors behind its prominence like The Mona Lisa Quotient would, this index works directly off user experience post consumption.

Truth be told, there are many ways to measure merit but through a year of unimaginable experiences I learnt that in the quadrant of novel opportunities, inherent value lies on one axis and everything else on another. That’s why I came up with the Mona Lisa Quotient, to see what points on the graph have positive value to me.

The world is a big place with way too many genuinely interesting, curiosity igniting, and frankly beautiful things in it – I want to start consciously making time to participate in what matters.