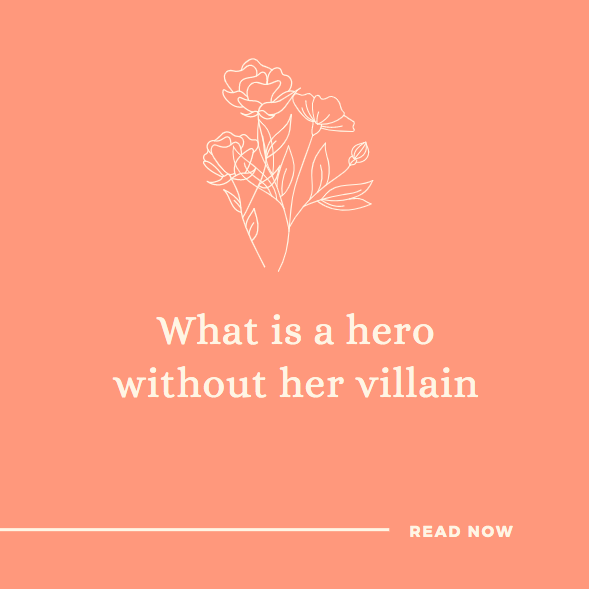 Trigger warning – contains themes of self harm and domestic violence.

“Kill me, I am unarmed, alone and at your doorstep. What is stopping you know?”

The hero was taken aback. Sure, she had hurt him before. Come close to killing him more times than she could count, but crossing that line had never been a part of the plan. After all what is a hero without a villain? The banters, the skirmishes, the fighting – it was all just a game. An elaborate show with a cocky antagonist and an un-deterring protagonist.

There stood the villain. A shell of the smug arrogant bastard that she dealt with. He spoke from behind this ghost like mask of pale skin, voice cracking, eyes on the verge of tears. And then she noticed.

He was injured and it wasn’t her handy work.

“I won’t entertain such reckless asks.” She opened the door a little wider, stepping aside and inviting him in, “come inside, tell me what brought this on.”

“Who did this to you,” the hero whispered ever so softly.

Still trying to regain composure, “nobody, nothing” he blurted out, stumbling over the word. Nobody. He said nobody even as his lover’s words remained seared in his brain. Worthless. Stupid.

Four small round bruises lined his neck, a painful shadow of a tight grip. Hundreds of tiny scars lined his arm; some old some new, some with the razor in his hand, some with the knife in his boyfriend’s. It didn’t matter, they all held painful memories no matter how many times they were kissed over with happier ones.

As the night wore on nobody became somebody and nothing became a lot.

“In the times when he isn’t slamming doors, isn’t screaming, isn’t going in the kitchen to find the most painful thing to hurl at me for the smallest misstep – in those tiny moments of contentment – I find myself validating him. Maybe things aren’t that bad. Maybe this is normal. Maybe I am the one overreacting.”

“If it had gotten so bad, you should have come here sooner – and not with a death wish”

“It wasn’t that simple but I am here now, and I cannot go back.”

“Then runway with me because at the end of the day, what is a hero without her villain.”