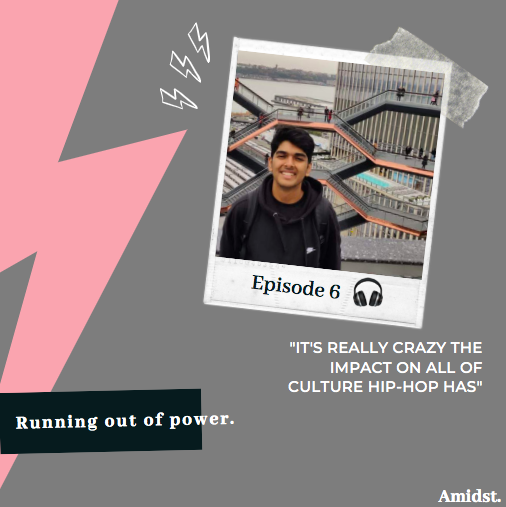 Here is episode six of “Running out of power” a podcast where I interview people about things that keep them “recharged”, but stop as soon as my recording device dies.

This week’s guest was unafraid to get just a little controversial as we threw opinions around some heavy-hitting topics surrounding rap music. Self identifying as a hip-hop junkie, my friend Samarth Jajoo is a hardcore defender of why rap music reigns supreme. We talk about some of the artist he enjoys listening to, touch upon Kanye for president as an idea, discuss sexism in the industry and he reveals the details behind the exceptionally successful lyrics.rip .

As for my own take, the recording quality really took a hit this time. Had to heavily edit out the unidentified buzz as well as the gaps caused by a lagging internet. Really looking into another remote recording app right now.

On the plus side, I think I have nailed the pre-podcast explanatory emails and have definitely become better in moving the conversation along. Still working, still struggling but I am getting there 🙂