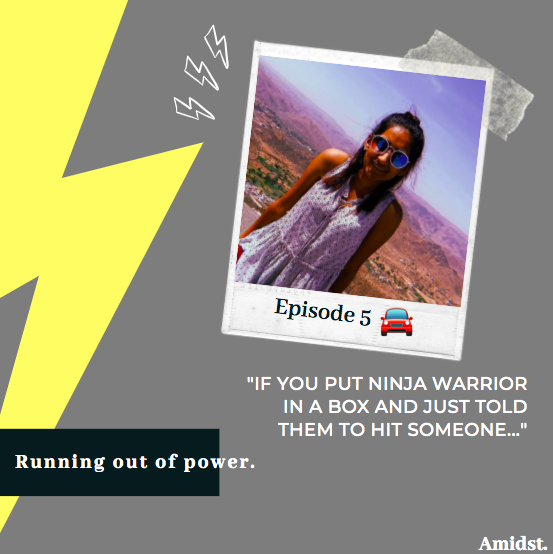 Here is episode five of “Running out of power” a podcast where I interview people about things that keep them “recharged”, but stop as soon as my recording device dies.

This week’s guest had trouble deciding what she wanted to talk about because she has so many interests (we may have to do subsequent episodes on baking, literature, debate and the list goes on). Mahi Patel is my five foot hobbit of a friend who is a bigger sports fan than most people give her credit for. Listen to us talk about professional tag (its a legitimate thing I swear), vent about this formula one season, and discuss the general reaction people have when Mahi chips in with random trivia.

My weekly update for this podcast is kind of short. Sound is generally better but laughter is still heard as static. Conversation this time was interesting, because it was a lot more back and forth (you hear a lot more of me than in pervious episodes) rather than just questioning.

All in all, I really enjoyed recording this episode which carried on for quite a while before I realised we had stopped recording (seriously good content was lost).

Sports fan or not, this conversation is fairly easy to follow through. And as always, I hope you enjoy the episode 🙂